XRP, the “Weakest” of the Top 10 Cryptocurrencies, Could Soon Dump 20%: Analyst

Despite the recent recovery, a number of analysts say that XRP is primed to move lower in the coming weeks. One trader went as far as to suggest that the cryptocurrency is prepared to drop 20% in the next four weeks alone.

Bitcoin, Ethereum, XRP, and other top cryptocurrencies have mounted a strong recovery since last week’s crash.

The recovery has convinced analysts that BTC, and thus altcoins, are primed to head higher. One trader explained that Bitcoin’s recent price action looks almost identical to that seen in April and May of 2019, which preceded an 80% rally that took the asset from the $8,000s to $14,000.

“BTC Renko Similarities. Divergence present into ~18% correction. The correction began a fresh run for ~80% gains. Current PA is looking very similar in structure to the last significant BTC run,” the analyst commented on the importance of the chart below and what is transpiring with the ongoing price action.

Yet according to a prominent trader, XRP is unlikely to rally despite the Bitcoin outlook.

He shared the chart below, indicating that the cryptocurrency is showing signs it is going to drop upwards of 20% to $0.16 in the coming four weeks.

The bearish sentiment is seemingly based on a form of Elliot Wave analysis, which suggests that markets move in predictable wave-like trends due to investor psychology.

“Poor XRP, just cant catch a break and hands down looks the weakest of all the top 10s. in saying that i think once it scam dumps to 0.16c it might be a pretty sweet long.” 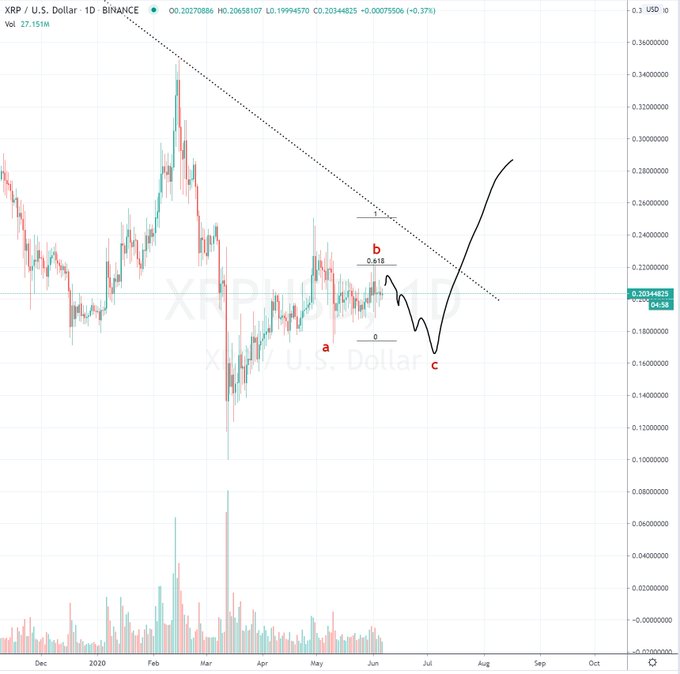 The analyst that shared the chart above is the one who, in the middle of 2018, called that Bitcoin would bottom at $3,200. This was an accurate prediction, with the flagship cryptocurrency forming a macro low at $3,150 just six months after the forecast.

Altcoins As a Whole Are Weak

It may seem as though XRP is being picked on, but purportedly all altcoins are bearish.

The lead technical analyst at crypto research firm Blockfyre recently shared that “altcoins (as a whole)  are really going to struggle” moving forward.

“ETH heading for levels not seen since 2016. LTC trading below 2014-2016 prices. XRP heading for levels from 2014, 2016, and 2017. The alt market looks like it could capitulate soon. Seems like the worst is yet to come but afterwards should provide huge opportunities,” he said.

This was echoed by Josh Olszewicz of Brave New Coin, who shared a few weeks ago that Bitcoin dominance is poised to rally higher.

Bitcoin corrected lower, but it remained well bid above the $9,300 level against the US Dollar. BTC is currently consolidating and preparing for the next key break.

This past week, bitcoin started a downside correction from the $10,360 zone against the US Dollar. BTC price broke the $10,000 support zone and it even spiked below the $9,500 support.

However, the bulls were able to protect the $9,300 region and the 100 simple moving average (4-hours). A low is formed near the $9,308 level and it recently started a fresh increase.

Any further gains could open the doors for a larger upward move towards the $10,200 and $10,300 levels in the near term.

Downsides Could be Limited in BTC

If bitcoin breaks the triangle support zone, it could correct again below the $9,500 level. The first major support is near the $9,400 level and the 100 simple moving average (4-hours).

The main support is near the $9,300 level, below which the bears are likely to gain strength and the price might dive towards the $8,800 level.

4 hours MACD – The MACD for BTC/USD is about to move into the bullish zone.

4 hours RSI (Relative Strength Index) – The RSI for BTC/USD is currently nicely above the 50 level.

Take advantage of the trading opportunities with Plus500 After 10% Difficulty Drop, Bitcoin Miners Are Back in the Game

Just weeks ago, there were fears that miners had begun to capitulate. Bitcoin blocks were slower than normal, transaction fees skyrocketed, and data analysts observed large outflows from miner wallets.

What happened was the block reward halving, which decreased the revenue of miners by around 50%.

After the halving in mid-May, Matt D’Souza, a hedge fund manager and the chief executive officer of Blockware Mining, said that 30% of Bitcoin miners were at risk of “extreme capitulation.” As blocks slowed, this assertion was proved correct.

But after an automatic adjustment to the Bitcoin network difficulty, which determines how hard it is for blocks to be mined, miners are back in the game.

And that may show that there’s upside in the works for this embattled market.

Bitcoin Difficulty Plunges: Miners Are Back in the Game

Every 2016 blocks, which is normally around two weeks, there is an automatic adjustment to Bitcoin’s difficulty. The protocol tries to adjust the metric to ensure that blocks are mined approximately every 10 minutes, keeping network conditions “normal.”

On June 4th, the latest adjustment hit, resulting in a -9.29% difficulty adjustment — the seventh-largest move lower ever and the fourth negative adjustment since the start of the year.

Miners were quick to turn on machines, responding to the difficulty adjustment — effectively a short-term boost to their profitability.

It shows that in the past 24 hours as of his tweet, there were three separate hours in which 12 blocks — exactly double the status quo of six blocks per hour — were mined. This occurred due to an increased number of miners in the space and natural variance in block times.

Analysts have perceived the recent influx of miners as bullish for the Bitcoin price.

Firstly, it shows that the fears of a “miner capitulation” are no longer as valid as they were earlier. This is pertinent to BTC because miners capitulating is believed to be what drove Bitcoin from the $6,000s to $3,150 in December 2018, alongside other macro drops in the crypto market’s price history.

And secondly, on-chain data shows that despite the increased number of blocks mined, miners continue to accumulate Bitcoin. In accumulating and not selling their coins, they are decreasing the amount of sell pressure that hits the underlying market.

Other On-Chain Signs Are Also Bullish

Other on-chain signals are also bullish.

Hans Hague, a senior quantitative analyst at crypto-asset fund Ikigai Asset Management, for instance, recently said that Bitcoin is in heavy accumulation as per on-chain metrics.

On June 1st, Bitcoin surged just under $1,000 in mere hours, rallying from $9,500 to a high of $10,400. It was a move that made analysts immediately flip bullish on the flagship cryptocurrency.

Chief executive of Real Vision Raoul Pal shared the below chart in the wake of the move with the following comment: 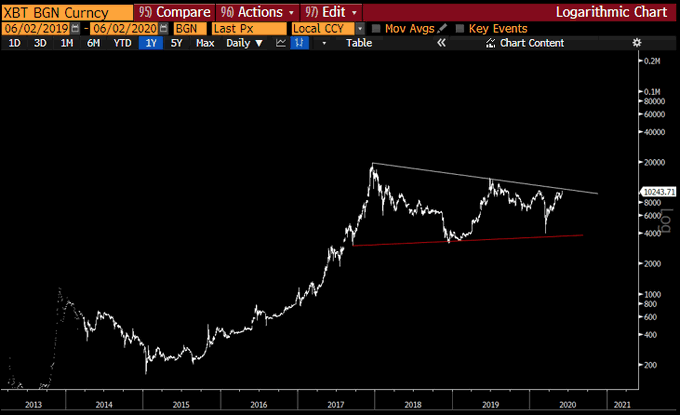 At the time, few expected the cryptocurrency to stumble after such a strong breakout.

But stumble it did, with Bitcoin again trading against the sentiment of the majority. The asset dove $1,500 in the span of three minutes in a sharp correction that liquidated over $100 million worth of long positions on BitMEX.

Clearly, most traders were caught off guard by the move. But one indicator predicted the rejection that would take place: Bitfinex’s order book. The order book is now predicting that upside is in the works.

Prior to the aforementioned $1,500 correction, an analyst shared the chart below.

It shows Bitfinex’s order book data laid on top BTC’s price action: “It’s a heatmap. A visual painting of the asks/bids on the book.” The trader who shared the chart said.

As we now know, the chart called the top of the rally, as Bitcoin was strongly rejected in the $10,400 range, around where the order book indicates there was resistance.

According to an updated version of the chart, Bitfinex traders are now supporting the price, stacking bids in the $9,500 region. Considering the relevance of the order book data to Bitcoin’s trend, we could be about to see another leg higher.

Other fundamentals are suggestive of upside as well.

As reported by NewsBTC previously, Blockstream CEO Adam Back says that he thinks Bitcoin will hit $300,000 within the next five years.

He attributed this lofty prediction to two core ideas: After plunging as low as $8,600 on June 2nd, Bitcoin has bounced back to $9,700, reclaiming support level after support level. It’s a move that has had convinced analysts that more upside is in the works.

One trader said that as long as Bitcoin holds $9,600, which he marked as a notable level on a short-term perspective, he sees no clear reason “why $11,000 would not be next.”

Galaxy Digital chief executive Mike Novogratz shared in the optimism. He told BitMEX’s chief executive Arthur Hayes that if BTC didn’t head higher from the $9,700 range, he would buy him steak dinner next time they were in Tokyo.

Though a key indicator suggests that the bull trend is over — or at least it’s almost over.

Bitcoin has shown extremely impressive strength since the lows seen in March of $3,700.

Even after a harsh rejection at $10,500 that liquidated dozens of millions, the cryptocurrency is still up more than 160% from the March lows. This means that over the past few months, BTC has outperformed basically any other multi-billion-dollar asset on a public market.

Impressive, truly, but the Bollinger Bands are showing that the rally may soon come to an end.

One trader shared the chart below on June 6th with the following comment:

What he’s referring to is the fact that Bitcoin is nearing the top of the Bollinger Bands (shaded in turquoise in the chart below).

Should Bitcoin follow historical precedent, the rally will continue but will end as soon as BTC begins to interact with the top of the Bollinger Bands, currently at $11,000. The analyst explained:

“Based on the last 9 times price cleared and closed multiple weeklies above the middle of bbs, the price has not topped until it taps the top BB. So we haven’t finished this up move.”

Technical analyst John Bollinger, creator of the Bollinger Bands himself is bearish on Bitcoin at the moment. He wrote earlier this week:

“The is a Head Fake at the upper Bollinger Band for $btcusd, time to be cautious or short.”

Other Technical Signs Corroborate This

Other technical signals corroborate the sentiment that Bitcoin will soon begin to reverse lower.